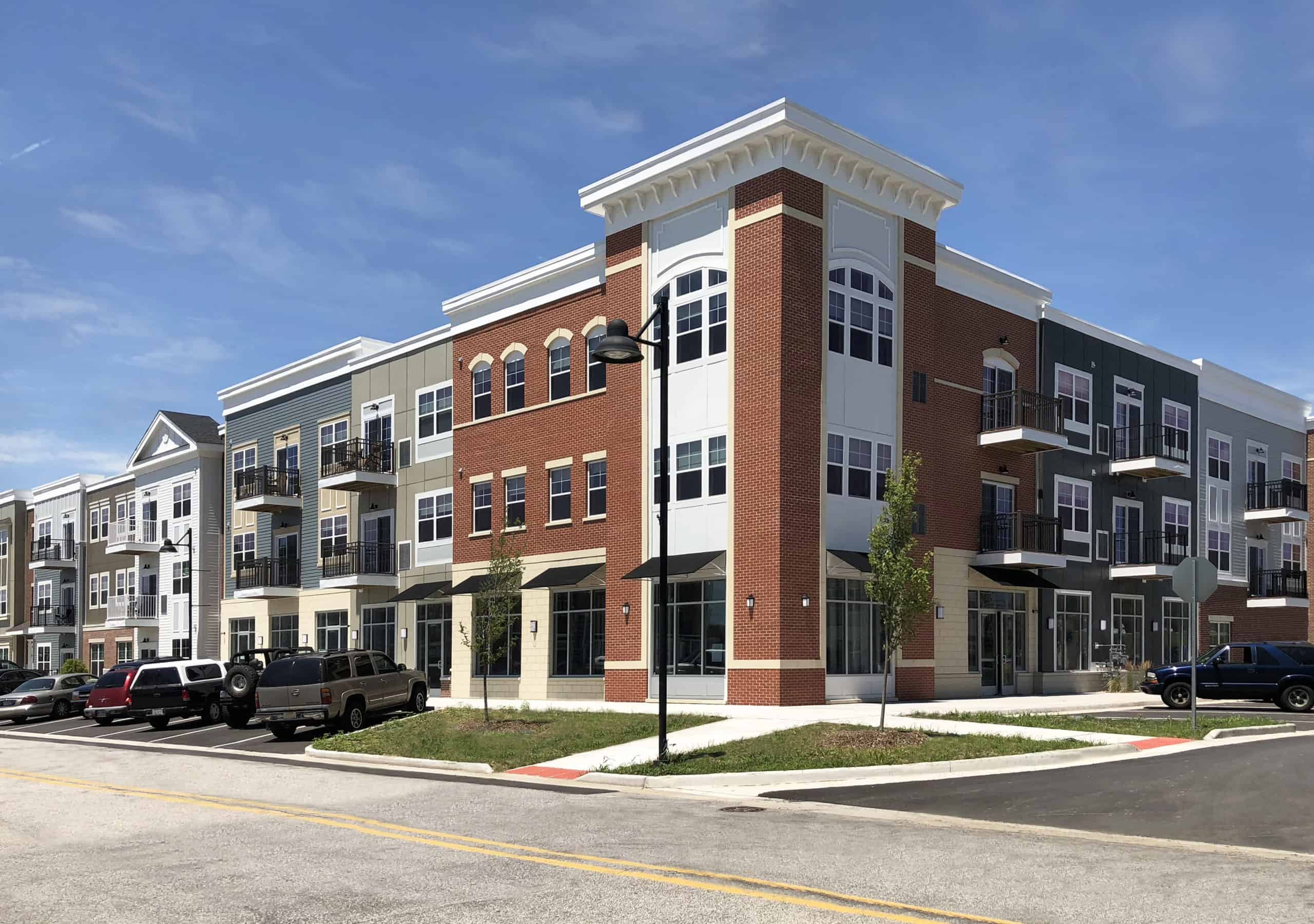 Prior to European settlement, Native Americans lived in Northwest Indiana. Mound Builders left a mound in the area now known as McCool, though the mound was destroyed in the early 1900s. Following the Mound Builders, the Wea tribe inhabited the area. The Wea were forced south by the Potawatomi.

Before Portage became a town, it consisted primarily of three separate communities in addition to much farmland. They were named McCool, Crisman and Garyton. In 1950, those communities only had 2,116 residents. La Porte County maintained jurisdiction over Porter County in 1835, and founded Portage Township that year.

Portage Township was primarily a farming community until railroad development began in the 1850s and 1860s. The first railroad to build in the area was the Michigan Central, completed in 1852. The Michigan Central connected Detroit to Chicago. This enabled local farmers to easily ship livestock, dairy and crops to Chicago and any other stop along the way. It was a boon to the farmers of the area at the time and enabled them to buy more land for farming. The Michigan Central was later bought by the New York Central Railroad.

The next railroad to build through the Portage area was the Baltimore and Ohio in 1874. This railroad crossed the Michigan Central at Willow Creek, near the village of Crisman. The Willow Creek Confrontation occurred in 1874, when the Michigan Central refused to allow the Baltimore and Ohio to cross its track. The situation was eventually resolved peacefully, and a crossing was made. Sand was also an industry in Portage due to demand in the growing city of Chicago. The railroads enabled sand to be delivered to Chicago more efficiently.

Between the 1870s and the depression era, Portage did not grow very much. It has been estimated that between 1880 and 1950, the growth rate averaged only about 64 people per year. This is despite the growth of towns to the west such as Gary, Hammond and East Chicago due to the industrialization of steel mills. Portage was not unaffected by the Great Depression. Due to the steel mills being in economic trouble, the farmers of Portage did not have demand to produce their products. As a result of this, the farmers had food, but no money. Many even lost their farms.

Like many communities in the country, World War I and World War II affected the economy of Portage in a big way. Steel mills geared into high production and labor was in high demand, thus drawing many people to the area.

After the war, the economy remained strong because of the high demand for automobiles and appliances, both of which the steel was produced at the steel mills. The population of post-war Portage grew very quickly. In the early 1950s, people came from Kentucky, southern Indiana and Illinois. Most were seeking the steady salary available in the steel mills and related industries.

National Steel opened a plant along the shore of Lake Michigan in Portage in 1959. This brought in about 1,600 new jobs. The Port of Indiana was also built in 1961 to accommodate trade with the world via Lake Michigan. In 1963, Bethlehem Steel began construction of a plant which was located partly in Portage. This project brought about 6,000 jobs to the area.

In 1959, Portage was incorporated as a town. Ogden Dunes and South Haven were excluded because the residents of these areas did not wish to be included in the town. Due to the surge of population after the war, many farmers were selling land to be subdivided into lots for families to build homes. In 1967, Portage officially became a city. During the 1950s and 1960s, the city of Gary was going through a time of racial strife. White people of Gary were seeking a way out of the turmoil, which drew many people to Portage during this time.

Portage is still a heavily industrial city. While primarily dependent on the Steel Industry, the 1980s brought a decline in the steel industry. As a result, C.O.I.L (the Community Organization on Industrial Location) was formed. This organization promotes diversified industry in the area. They have had part in developing the Coca-Cola bottling plant and further development of the Port of Indiana.

Very few farms are still active in the Portage area. However, many original descendants of founding families are still in the area.

Portage has seen many new green technology industries locate to the community since the early 2000s including Fronius USA. In 2016, the City opened a new Police Station and Fire Station in the downtown corridor. The new Police Station is triple the size of the former station on Irving Street.

Other Resources in Cities and Towns

" KAREN MARTIN Oct 11, 2019 I was in TN buying a house in Lake County IN. Laura made this stressful situation not so bad! She was communicating... More Laura Ross (owner) Oct 13, 2019 Thank you VERY much for such kind words, your a sweetheart and I wish you and your family years of happiness and blessings. Enjoy your beautiful new home..🏡 "

" We originally found Laura on realtor.com, she called us immediately. I was relocating to Portage from Utah and took a position at the local HS athletics dept. Laura helped us get a realtor in Utah to sell our home as well as finding us a home in Portage to move into. The transaction went spot on and was so smooth. Thank you for helping us in all the many ways that you have done. Not only our realtor but now our friend. "

" I used Laura on many transactions. I purchased my first home in 2016, and sold it in 2018 with a profit of $40k. Purchased my dream home following that sale and couldn't be happier. I have since grown my equity with using her suggestions and knowledge well beyond $100k. Highly recommend her if you want true success! "

" I was connected with Laura through a fb friend. I was interested in buyer investment property in Valparaiso. Because I was from Chicago it was hard to view the property immediately but Laura would go herself and facetime me and my boyfriend so we would at least have a inside view. I wrote a offer without even seeing the property in person with Laura's guidance. We are extremely happy and will buy again soon. Thanks Laura, you are truly amazing! "

" Laura was our rock! We needed a place for our son who was starting college at a near by university. We had a budget and strong expectations. Laura never gave up and was in consistent communication with us. We needed a 4 bed/2 bath home so we could rent out other rooms to college kids, she found us that and more. We are extremely pleased with 100% of everything. "

" Thank you Laura for your kind words of wisdom as well as your guidance through us selling my parents home. This was such a hard and emotional thing to do and Laura's compassion and help made this a seamless transaction. Laura did everything perfect and made our fears go away. Your the best, thanks again. Holli & family "

" I found Laura through a online marketing site. Laura immediately followed up with me and answered all my concerns. I had a few issues with my credit but Laura said that was ok, she set me up with Tom a lender and he was able to get me connected to the right lady to fix what needed fixed on my credit. Laura never gave up on me and with help from Tom the lender I was able to close on my home for my family. I am grateful to Laura for never giving up on me. "

" Laura is the best realtor that I have ever worked with. She comes with a world of advice and knowledge to get done what needs to be. I am very thankful that I had her to walk me through it all. "

" Corey Ross Oct 14, 2019 Highly highly recommend! Helped me find a realtor in another state and stayed in communication with us while I looked... More Laura Ross (owner) Oct 15, 2019 Thank you so very much ❤️. I'm glad that I was able to work to help you reach your goals of homeownership. Many blessings in your 1st home. #LauraRossRealtor "

" Laura showed me homes that I never thought I would like so much. She was patient and knew exactly how to get our offer accepted. I highly recommend using her. "

" Samantha O Feb 20, 2020 Laura is an expert realtor. She is hands down one of the kindest and most caring people I have ever met and she gives it all to her clients! You would be lucky to call Laura your realtor! Laura Ross (owner) Feb 21, 2020 Thank you so much for the kind words Sam.💛🙂 "